From The Broadsheet – September 2018

When I moved to Frilsham and started regularly ringing the church bells in Yattendon, I noticed the name of John Allum on the plaque in the church commemorating those who died in the ‘Great War’ of 1914-18.   John was my great uncle, born in 1882, the 6th of nine children born to George and Emily Allum who lived in Ivy Cottage, Yattendon.   The Allums had for generations worked on the land locally, George was a sawyer and other members of the family were farm labourers, probably working on local estates.

John married Agnes House in 1909, when they were both aged 27, at her home village of Burghclere.  At the time of the 1911 census, they were living at Highcott Cottages, and their daughter Phyllis Margaret was born the following year.  John’s occupation is given as domestic gardener.

John, his father George, and at least one of his brothers (Maurice, my grandfather) were all church bellringers at Yattendon.   This is the only picture I have of him, ringing handbells in the road outside the church. 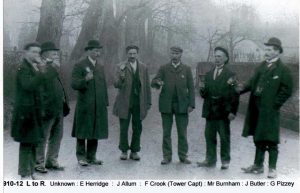 John enlisted as a Private in the Royal Berkshire Regiment in March 1915, and was posted to France in November 1916 as a member of the Labour Corps.   He may also have fought at Gallipoli, and was awarded the British War Medal and the Victory Medal.   He very nearly made it through the war -  he died just 6 weeks before the Armistice at the age of 36.   John is commemorated at the war cemetery extension at Templeux-Le-Guerard, so it is probable that he died as a consequence of the action retaking Templeux-Le-Guerard from the enemy on 18th September 1918.  There are 130 other UK and Australian graves at this cemetery.

Agnes remarried in 1923 - Albert Henry Sellwood - and they lived at Ashampstead.   She died in 1971 and she and Albert rest beside each other in the graveyard there.

On 27th September this year, 100 years to the day that he died, a band including other members of the Allum family will attempt a peal on the Yattendon church bells half-muffled to commemorate John and other local men who gave their lives in that terrible war (a full peal is long and difficult to ring, so we always say ‘attempt’ just in case we don’t achieve the full distance).

These are the very same bells that John, his family, friends and neighbours used to ring to mark services, weddings and other special events in the community and I hope it will be a fitting commemoration of their sacrifice.

Photo:  Handbell ringers at Yattendon, by courtesy of Dick Greenaway.

View all posts by: Bob Lyon